Merri Corner Community Garden welcomes you to join our community. We meet up on the second Sunday of each month to work together on the communal beds, keep the paths covered in mulch and reduce the grass and weeds from the plots. If you are around and fancy getting outdoors this weekend, come along to Merri Corner Community Garden’s MONTHLY OPEN GARDEN, held on the second Sunday of each month.

Free Compost Workshop (all welcome) at 11am

Plot holders, neighbours to the garden, Brunswick East locals and friends are all welcome.

It’s a chance to get your hands dirty, catch up with your fellow gardeners and help our garden grow. There’ll be plenty of odd jobs to do like tidying up garden beds and weeding or come along and work on your own plot.

We will also be sowing tomato seeds in the mini hot houses for spring planting and also sowing some winter greens and peas seeds in the communal beds. These communal veggies and tomato seedlings are for sharing amongst all gardeners, so come down to lend a hand, share your knowledge and ask any questions about propagation.

Come along to Merri Corner Community Garden’s MONTHLY OPEN GARDEN this Sunday 13 April, 10am – 12.00pm
Free Compost Workshop (all welcome) at 11am 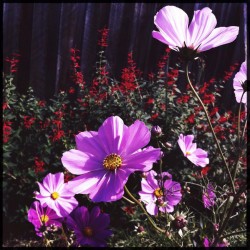 Spend some time working on your own plot, or help with some general gardening jobs such as weeding, mulching, general garden tidy-up and maintenance – there’ll be something for everyone! This is a brilliant chance to get your hands dirty, catch up with your fellow gardeners and help our garden grow.

Plot holders, neighbours to the garden, Brunswick East locals and friends are all welcome.

If you haven’t been down to your plot for a while and need a hand getting it into shape for the upcoming Winter plantings, come down to the Open Garden and we can all pitch in to lend a hand. Or email the Garden Committee on [email protected] if you need some help.

Happy gardening, hope to see you on Sunday!

Thank you to Lauren Keim for the beautiful photo of the pineapple sage growing in our Kids Discovery Garden.

Come down to the next Veg In Veg Out on Sunday 14 April.  We’ll have a workshop on how to propagate local native plants with special guest Ann McGregor from Friends of Merri Creek.

Veg In Veg Out is a free monthly event at the Merri Corner Community Garden on the second Sunday of each month and all are welcome!

Here’s a link to the lovely article and interview with MCCG gardener and former president Eleisha.

Thanks to all who could make it down for the photo on the day!

The MCCG Committee meets on the first Monday of the month at 7pm. The meetings are generally held at the Edinburgh Castle Hotel (cnr Sydney Rd & Albion St), at a committee member’s house, or down at the garden in summer when the weather is fine.

All MCCG Members and Plot holders are welcome! If you’d like to come along to the next meeting, please get in touch with us on [email protected] and we’ll let you know which venue the meeting is at.

CERES has provided inspiration, information, fresh healthy groceries and great coffee to the Melbourne community for more than 2 decades now. The organisation always been a great support to the MCCG, and we’d like to show our support for it by getting this response out and inviting you to pass it on – either by email, verbally or however you please. It’s important that we don’t let a poor piece of journalism critically damage this important Moreland institution.

(For more reading – go to http://safefood.ceres.org.au)

The Real Dirt on CERES

What’s the worst thing that can happen to an environment park that educates kids and grows food? A contamination scare that breaks in the city’s most trusted paper.

Appearing on page three of The Sunday Age, March 5th edition, just the week before CERES Organic Farm was given the all clear by Moreland Council and the EPA, a feature article reported, “produce grown at CERES banned from sale”  because of lead contamination.  The timing of Steve Holland’s article could not have been worse or more mischievous.

If The Sunday Age had bothered to check their story, the real but far less newsworthy story would have revealed that Moreland Council and EPA testing had found five privately leased community garden plots with lead levels slightly over ANZFSC  limits and that produce from CERES Organic Farm had never been contaminated or banned from sale. Never let the facts get in the way of a good story they say.

When I read the article, including a quote from CERES chairperson, Robert Larocca, which seemed to back up the story, my first thoughts were, “That’s not right and why would Robert confirm it?”

And then I found out how some journalists work and it all became clear. At the time of the interview in January the final Moreland Council test results hadn’t come out but Steve Holland obtained a leaked version of the preliminary results. The document had the test results but not the locations of the tests. Wrongly assuming the results referred to the CERES Organic Farm instead of the community garden plots, Holland used the report to ask Robert Larocca what he would say to people who could have eaten contaminated CERES produce? Larocca’s reply was, “It is unfortunate it has happened and we are sorry for that. A very small number of people will have purchased that [contaminated food], including myself.” It was an honest answer to a hypothetical question but Holland used the quote make it seem like CERES had actually been selling contaminated produce without ever checking his story was correct.

Two months passed before the article was finally published. It would have only taken a simple phone call to discover that Council and EPA test results had cleared produce sold at CERES and isolated the problem to five 4x4m community garden plots not accessible to the general public.  But no phone call was made, the story went to print and all hell broke loose.

I’ve been feeling sick about this for the last fortnight. I used to trust The Age. I read it every day, but now I feel like CERES’ good name has been destroyed by sloppy journalism and a paper eager for a controversial story.  Two weeks later and it’s all old news; Moreland Council and the EPA  came out with their test results clearing CERES Organic Farm, new articles have been written with the facts but fear is a powerful motivator and people are turning away from CERES.  The damage has been done.

The outcome has been immediate for CERES; Fair Food orders are down, the Market is quiet. We are reducing what we buy from the 50 plus Victorian farmers and processors who depend on us for their income. Our packers and drivers are losing shifts and CERES will need to take money away from environmental education programs to cover the financial losses of Fair Food and Market. So much damage caused by a few careless words. 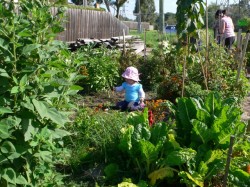 As we’ve been so productive at Busy Bees in recent months and there’s been lots of action on the raised beds and northern verge project we will take a rest in October from Busy Bee-ing.

Stay tuned for news of the November Busy Bee, which will be the last for this year. We will combine it with an end-of-year BBQ so we hope to see you there for some shovelling and snags. 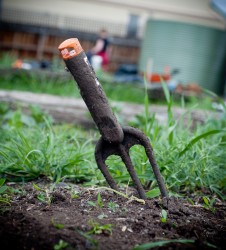 Next Saturday 30 July there’ll be a Busy Bee down at the Merri Corner Community Garden, corner of Donald and Harrison Streets, Brunswick East from  9.30 – 12.30pm.

We’ll commence preparation work on the northern verge project by laying newspaper and mulch, plus there will be a number of other small jobs around the garden to get stuck in to.  Please bring your old newspapers down to the garden and leave them just outside the shed area.

Annabel’s been busy making plans for a garden of olive and fruit trees on the northern verge and there will be a short presentation at 11am of the concept plan – so if you’re interested, do come along!

Thanks to all who’ve contributed ideas so far and to those who have helped with taming the black plastic over the past few months.  If you are interested in helping to maintain the garden on the northern verge please contact Annabel at [email protected]

Come down for a short stint, or for the whole Busy Bee – all are welcome!

See you next Saturday.

Despite heavy rain and very boggy soil we managed to get the tank delivered and it’s not sitting next to where it needs to go. We just need to wheelbarrow the gravel from across the road to fill the base in… who’s keen to help this Saturday morning? 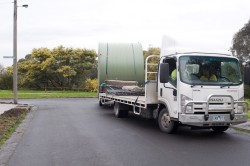 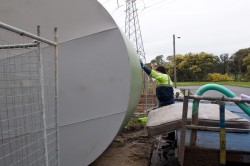 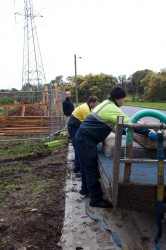 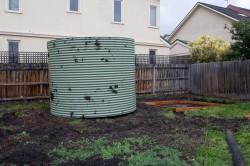 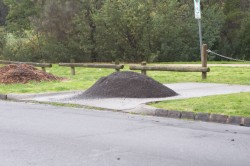 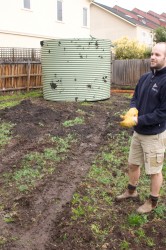